Two days of busy stitching are over. As I mentioned in the other post, I took part in the e-embroidery workshop organised by pixalache helsinki and lead by Ramyah Gowrishankar and Kati Hyyppä. It was a lot of fun and I learned a lot about the different materials and how I could approach them. In difference to the main focus of the group, I decided to not go for integration of LEDs into a more or less traditional embroidery design but focus on how to use conductive thread and normal fabric to produce sound. In preparation to this, I had the opportunity to use conductive thread in TAUKO’s new embroidery machine; an attempt that turned out to be challenging. I had two different sorts of thread available (thanks to Ramyah and Kati for this), one thinner with a high resistance and one low-resistance silver-coated nylon thread. Unfortunately, I was not able to sew the first one with the machine as it broke immediately and generally was quite difficult to unroll from the spool. The second one worked better; it broke only twice over stitching my small design. My guess is that this was due to the speed of sewing, however, I was not able to adjust it on the machine. 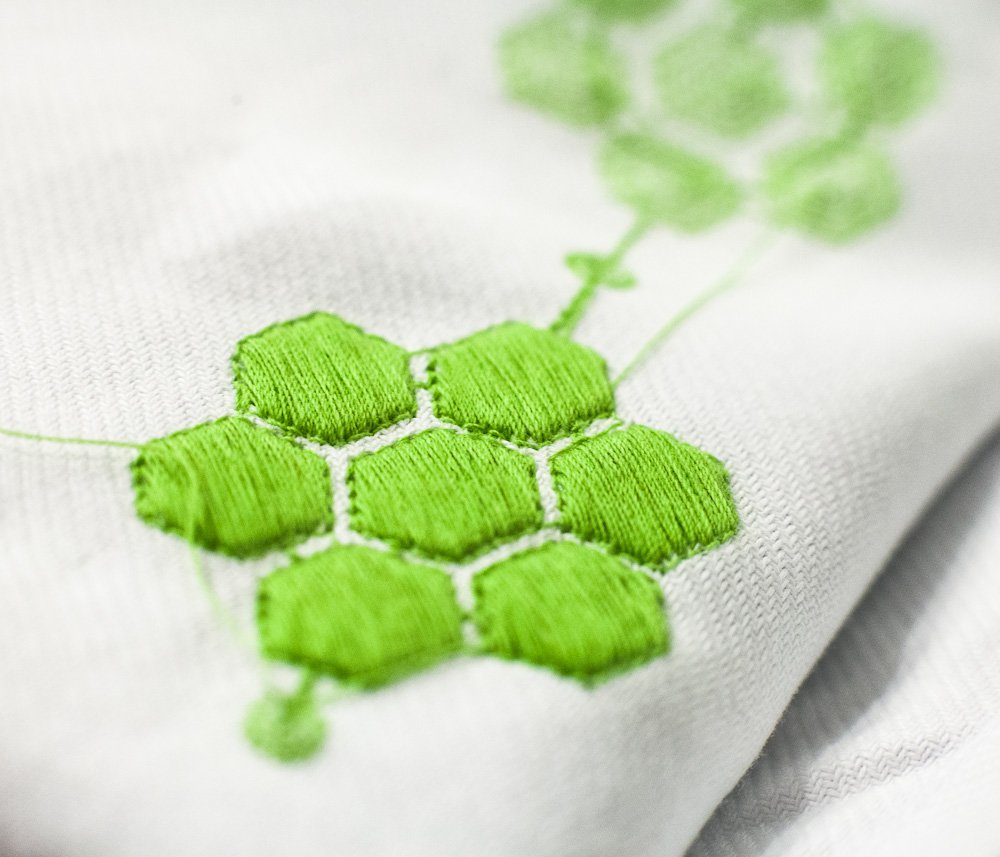 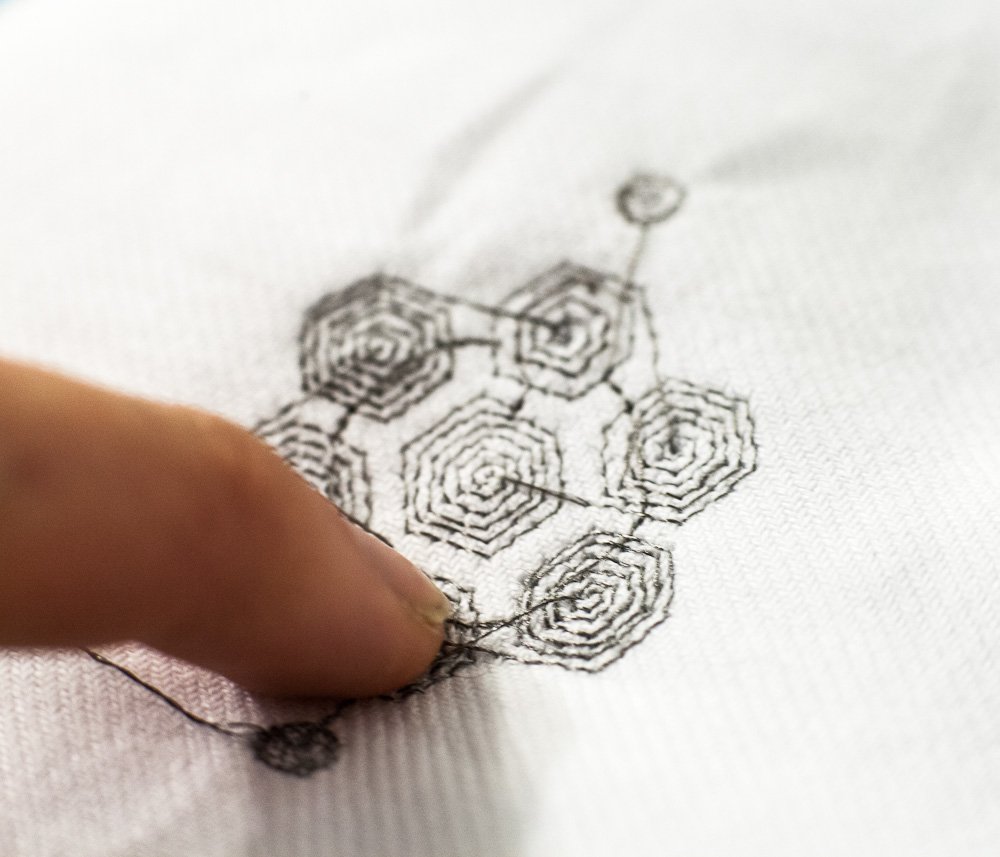 In the workshop then, I took my prepared samples and tried to use them as conductive surfaces. I hoped for some noisy sounds while rubbing them onto each other. For this, I connected one pattern to the minus pole of a 9V block and the other to the plus pole via a speaker. The resulting sound was more clicky and harmless: a look at the signal with an oscilloscope (tip: seeed studio sells open hardware mini oscilloscopes, they are quite basic but are cheap, are, with a size of less then a moleskine, easy to carry and work great in a workshop environment) revealed that the conduction of the thread across threads is actually too good: there is either a connection (on) or there’s none (off). What I was looking for was more something like a noisy, dynamically changing resistance. 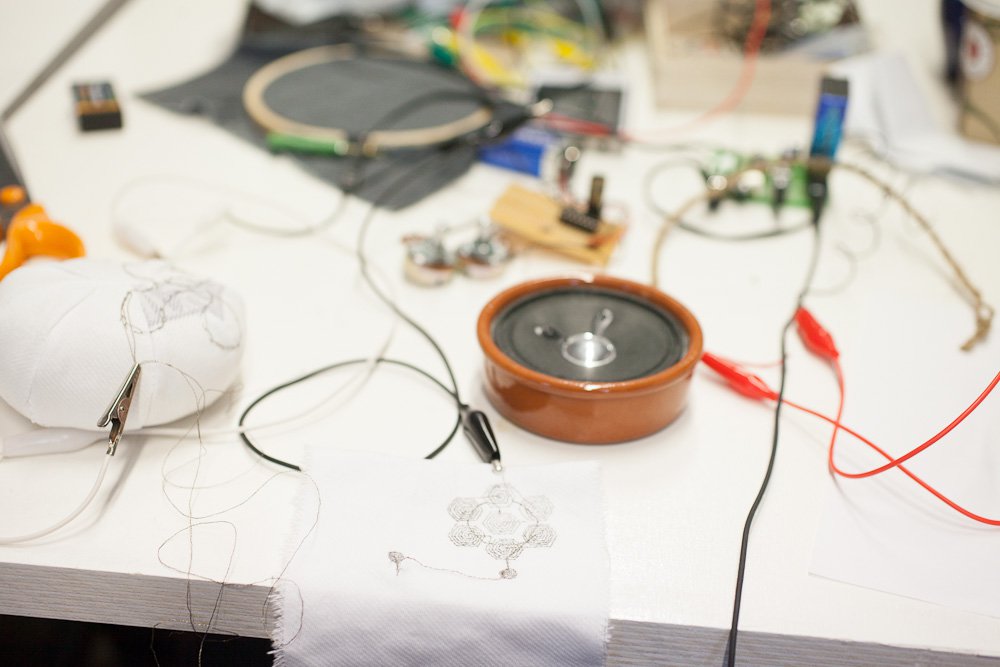 Ramyah then meant that I should try the high-resistance thread which I did by attaching four strings to a piece of cloth in a small hoop. Twisting the thread against each other resulted in behaviour that was more into the direction of what I was thinking of. Change of the sound was quite huge in relation to the movements to be done. 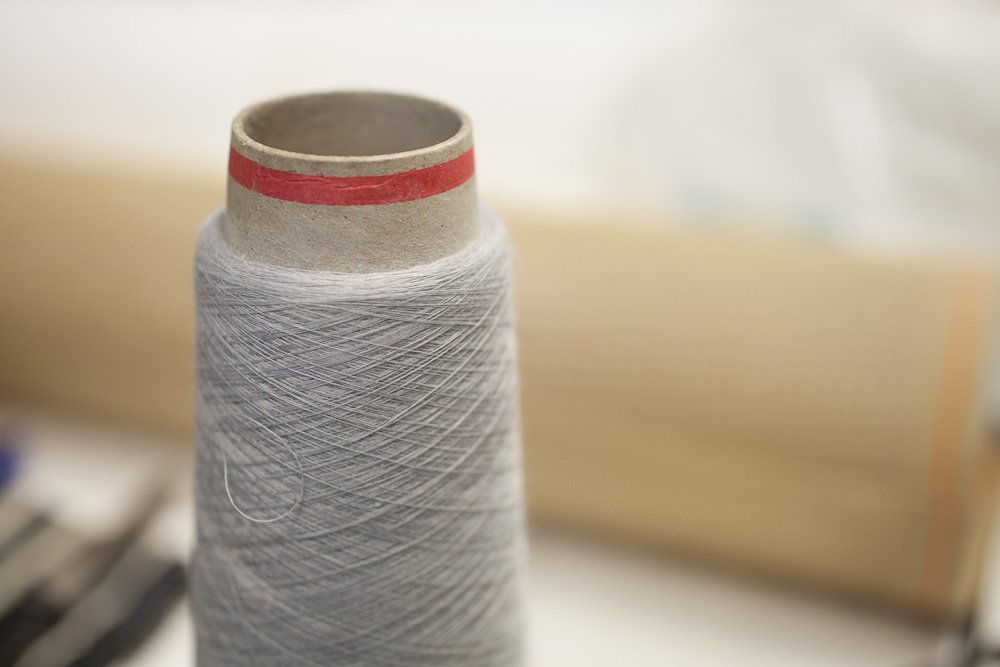 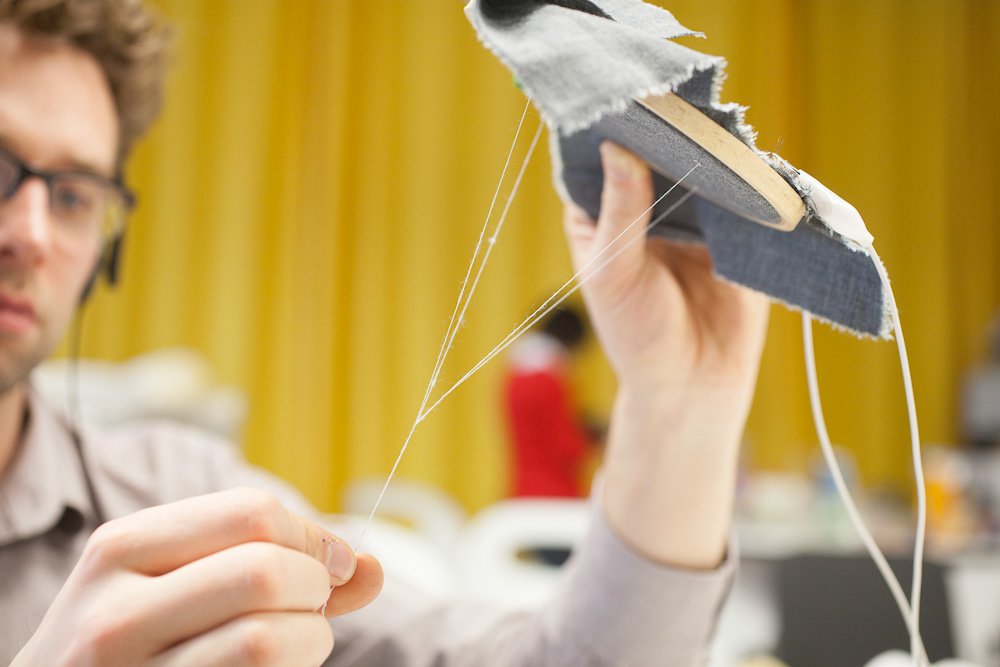 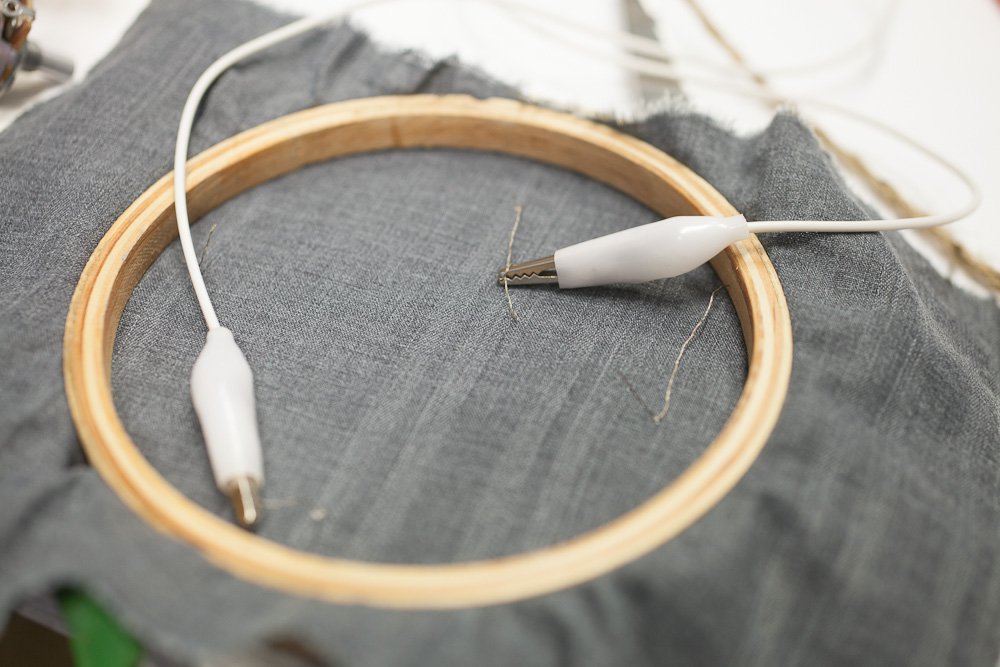 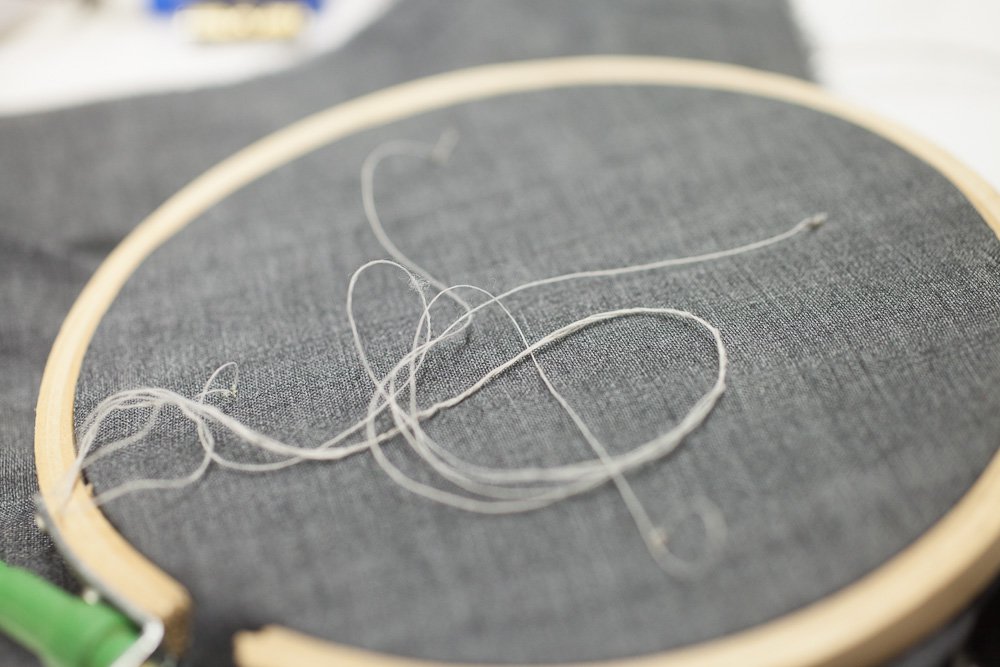 The other object I prepared for the workshop was a ball-like artifact filled with sheep wool. For my first experiment, I stitched a wiggling line onto it, turning it into the second electrode for the first experiment. In the next attempt (on the second day), I decided to add several more of these wiggling lines to it because I found out that skin conduction actually works quite well between wires. My hope is that by having several wires with different signals on it and one ground wire, I can purposefully “shortcut” signal and ground wires by touching the surface at various places. Over the workshop I did not manage to test this due to various reasons (my small analogue synth circuit broke down and I only had one sound source available). In the process of doing the stitching, my fellows around me somehow came up with the idea that I could make a jellyfish out of my object, a thought that I liked a lot because it fits nicely to the theme of the workshop (Ramyah’s e-embroidery example is a deepsea fish with a lantern). 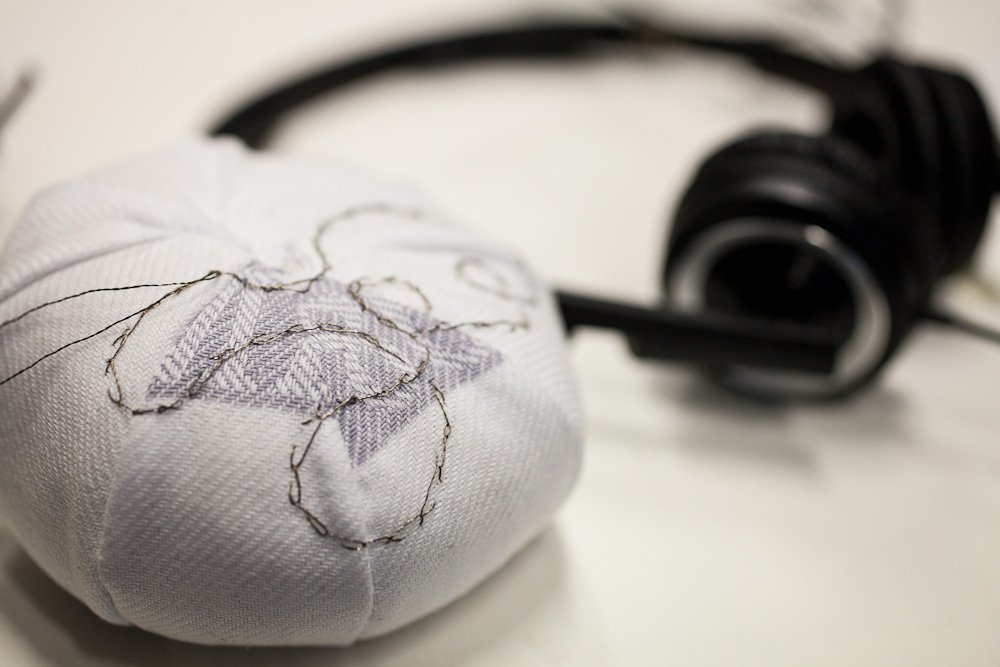 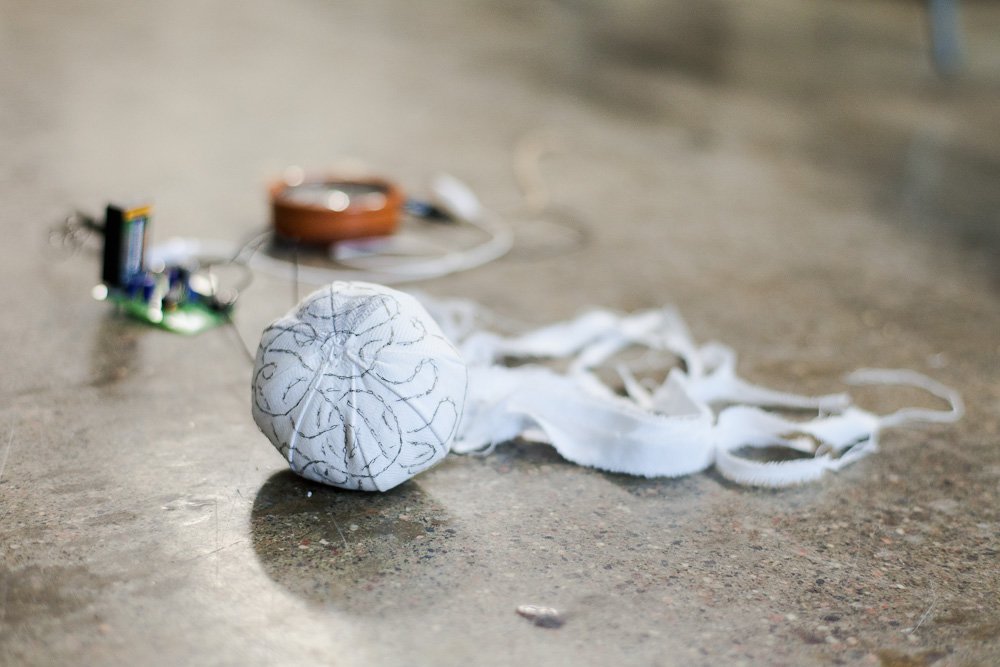